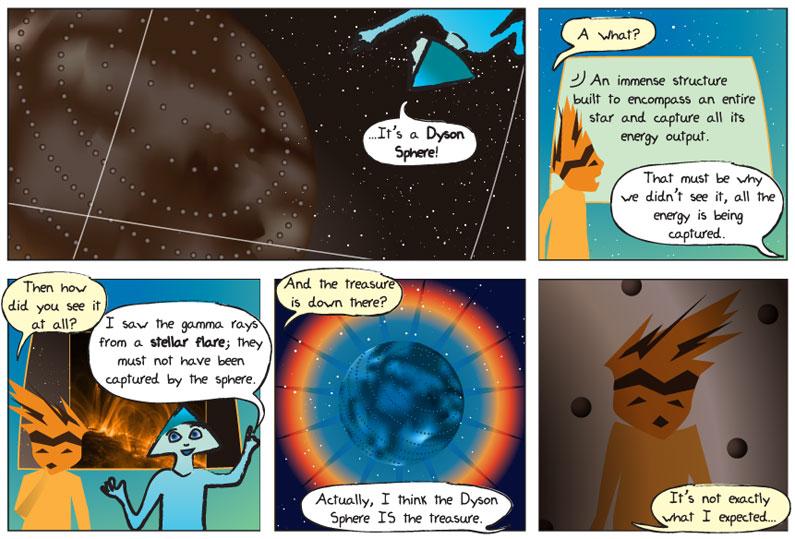 Beggrin: A what?
Epo: An immense structure built to encompass an entire star and capture all it’s energy output.
Alkina: That must be why we didn’t see it, all the energy is being captured.

Panel 3
Beggrin: Then how did you see it at all?
Alkina: I saw the gamma rays from a stellar flare; they must not have been captured by the sphere.

Panel 4
Beggrin: And the treasure is down there?
Alkina: Actually, I think the Dyson Sphere is the treasure.

Panel 5
Beggrin: It’s not exactly what I was expecting.

Dyson Sphere – A hypothetical monumental construction where a hollow sphere is constructed around a star to harness all of its radiant energy.

Stellar Flare – An explosion in the atmosphere of a star caused by a sudden release of magnetic energy. When this occurs in our own sun we call it a Solar Flare.

During the 1960s, theoretical physicist and mathematician Freeman Dyson imagined an artificial sphere surrounding a star. Dyson noted that throughout human history, technological societies have continuously increased their need for energy. He surmised that a significantly advanced civilization would need to harness all the energy of a star in order to meet their energy needs. Dyson postulated that such a society might construct a spherical shell around their star to do that. These hypothetical objects have been referred to as Dyson Spheres ever since.

A star is an immense source of power. Humanity currently uses about 1.5 x 1013 watts of power, but the Sun produces about 3.6 x 1026 watts; that’s more than 100 billion times as much power as we consume. Dyson believed that searching for objects like Dyson Spheres could be the best way to search for signs of advanced extraterrestrial intelligence. Of course, no one has found any Dyson Spheres yet.

In this episode, Alkina realized that she saw gamma-ray emissions from a stellar flare. For the most part, main sequence stars are not very good sources for high-energy gamma rays. However, they do emit gamma rays in the event of a stellar flare. During flare events, charged particles are accelerated by the star’s magnetic field and interact with its atmosphere. Stellar flares are somewhat uncommon, though, so Epo and Alkina were lucky to have been looking in the right place at the right time. Gamma rays are the most energetic form of light, and that is what makes it possible for these rays to make it through the hypothetical sphere material, whereas lower energy light rays could not.

Living with a Star, our Sun: News from NASA’s Solar Dynamics observatory.

Solar flare – Wikipedia article on Solar Flares. A solar flare is a stellar flare where the star happens to be our Sun.