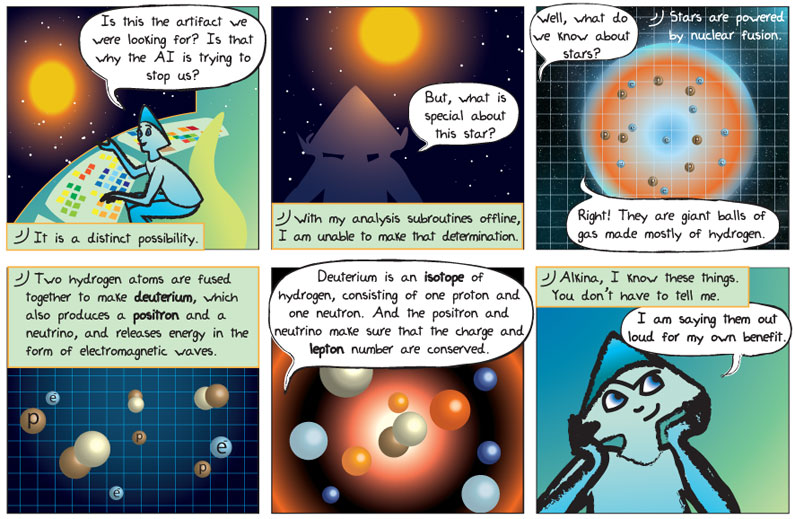 Panel 1.
Alkina: Is this the artifact we were looking for? Is that why the AI is trying to stop us?
Epo: It is a distinct possibility.

Panel 2.
Alkina: But, what is special about this star?
Epo: With my analysis subroutines offline, I am unable to make that determination.

Panel 3.
Alkina: Well, what do we know about stars?
Epo: Stars are powered by nuclear fusion.
Alkina: Right! They are giant balls of gas made mostly of hydrogen.

Panel 4.
Epo: Two hydrogen atoms are fused together to make deuterium, which also produces a positron and a neutrino, and releases energy in the form of electromagnetic waves.

Panel 5.
Alkina: Deuterium is an isotope of hydrogen, consisting of one proton and one neutron. And the positron and neutrino make sure that the charge and lepton number are conserved.

Panel 6.
Epo: Alkina, I know these things. You don’t have to tell me.
Alkina (irritated): I am saying them out loud for my own benefit.

Deuterium – is an isotope, or a variation, of the hydrogen atom with a neutron in its nucleus. Most hydrogen nuclei contain only a proton. Deuterium, which makes up just a fraction of naturally occurring hydrogen, has a proton and a neutron.

Positron – is the anti-particle of the electron. It has all the same characteristics as an electron except for its charge, which is positive.

Lepton – One of the 3 most fundamental building blocks of the Universe, along with quarks and bosons. The most common leptons are the electron and neutrino.

The law of charge conservation states that electrical charge cannot be created or destroyed. This means that for any physical process, the electric charge is conserved, or in other words, the net sum of positive and negative charges before a reaction must be the same as after the reaction.

A positron is the antiparticle of the electron, and both belong to the lepton family of elementary particles. Another conservation law states that the lepton number, which is the number of leptons in a reaction, must be conserved. But at the beginning of the reaction there are only two protons, neither of which is a lepton. That means the reaction starts out with a lepton number of zero. However, the complete reaction produces not only the deuterium and positron, but also an electron neutrino (represented by the Greek letter nu with a subscript e), another kind of lepton. Because the positron is an antiparticle it has lepton number -1. The electron neutrino has lepton number +1. When added together the total lepton number of the products is zero, just as it is for the protons that start the reaction.

As you can see, a seemingly simple nuclear reaction can have a lot of things going on. Yet this process is happening in our Sun hundreds of millions of times every second, which is a good thing, as without these reactions there would be no energy produced in the Sun, and no life as we know it on Earth.