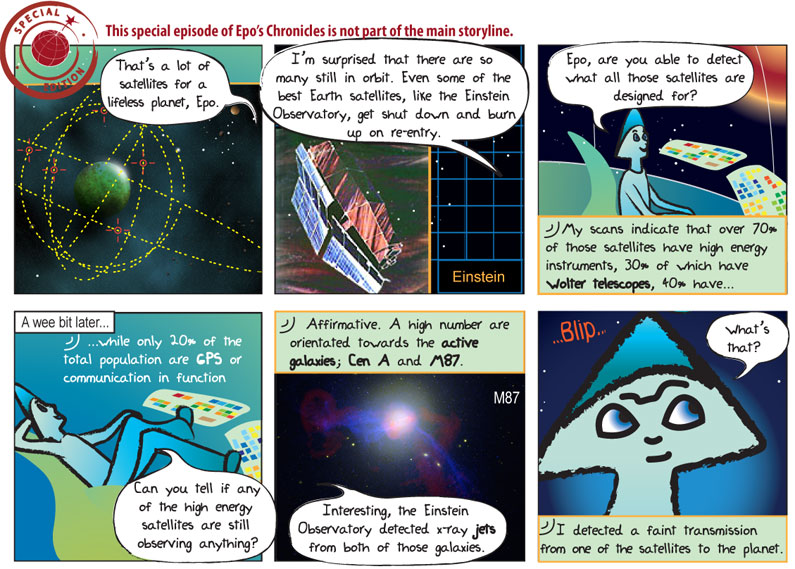 Cen A – Centaurus A, also known as NGC 5128, is a lenticular galaxy in the constellation Centaurus. The “A” in Cen A means it is the brightest radio source within that constellation. Cen A is a radio galaxy, and at only 11 million light years from Earth it is the closest active galaxy to us.

M87 – The 87th object in the Messier Catalogue is a very large elliptical galaxy some 55 million light years away at the center of the Virgo Cluster of galaxies (our local supercluster). M87 is an active galaxy; its strong nuclear radio emission makes it a radio galaxy. It is also one of the brightest radio objects in the sky.

The Einstein observatory, also known as HEAO-2 (the second High Energy Astrophysical Observatory), was launched in November of 1978 and remained in operation until 1981. At that time it was safely de-orbited and burned up in the Earth’s atmosphere upon re-entry. With its ability to focus soft x-rays it was able to detect hot X-ray emitting gas from individual galaxies and galaxy clusters to levels unprecedented for the time. Its high sensitivity and ability to image in the X-ray band allowed the observatory to make important contributions to our understanding of galaxy cluster evolution. The Einstein observatory was also useful in studying the structure of supernova remnants, and in finding new X-ray sources.