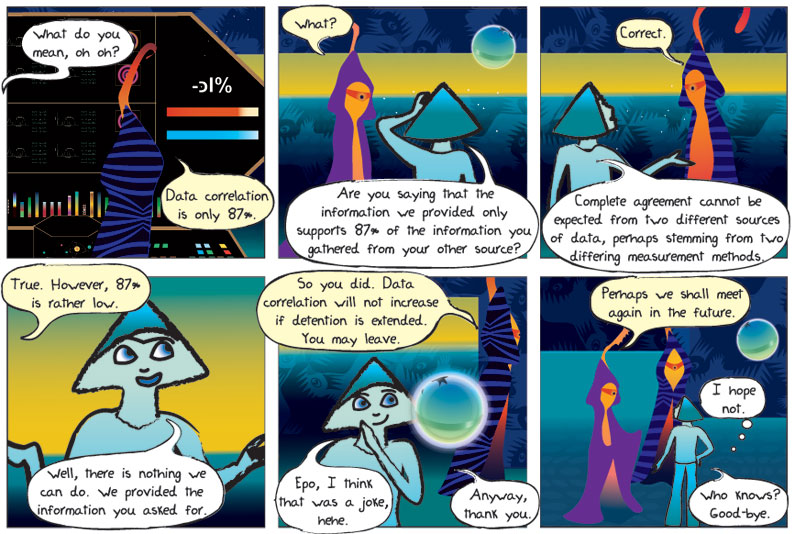 Alkina: What do you mean, oh oh?
Worldship: Data correlation is only 87%.

Panel 4
Worldship: True. However, 87% is rather low.
Alkina: Well, there is nothing we can do. We provided the information you asked for.

Worldship: So you did. Data correlation will not increase if detention is extended. You may leave.
Alkina: Epo, I think that was a joke, hehe. Anyway, thank you.

Worldship: Perhaps we shall meet again in the future.
Alkina thinks: I hope not.

As discussed in the previous episode, scientific data must be verified from multiple different sources to be valid. Sometimes data from different sources do not match exactly. The more closely they match, the more confidence we might have that they are correct. But should we ever expect an exact match?

A concrete example will help clarify what we mean. Suppose that you and a friend use stopwatches to time a foot race. As the race starts, and then as the racers cross the finish line, you both hit the stop buttons on your stopwatches to record the times for the race. Very rarely will you both get the same exact time. This is not because of a problem with the watches; even if they are in good repair and working properly you and your friend will likely get close, but slightly different times. Why do you think this would happen?

Your reaction times might be one source of error, and the precision of the watches might also come into play. For example, the stopwatches you use might only be good to a tenth of a second. You could in principle measure time more accurately if you got stopwatches that could measure time in hundredth of a second or thousandth of a second and so on, but higher precision watches would only help up to a point. Eventually, the time it takes for you to depress the stopwatch button would be the most important limit on your precision. Your agreement with your friend’s measurement will ultimately be limited by your reaction times and the precision of the watches. This is always a finite limit, and you should expect your results to agree to whatever overall precision the measurements have, but not necessarily beyond that. Even sophisticated electronic timers like the ones used in the Olympics and other big competitions have finite, though relatively small limits on their precision, and this is true for all measuring systems, not just those used for time.

The alien is unhappy because the data provided by Epo and Alkina only matches 87% with what they have learned from other sources. However, given the above statements, perhaps 87% match isn’t so bad. It might be the best that can be expected from the two different methods with which the original data were gathered. All scientific measurements are limited in this way, and an important part of understanding any scientific claim is an awareness of the precision of the data used to support the claim.