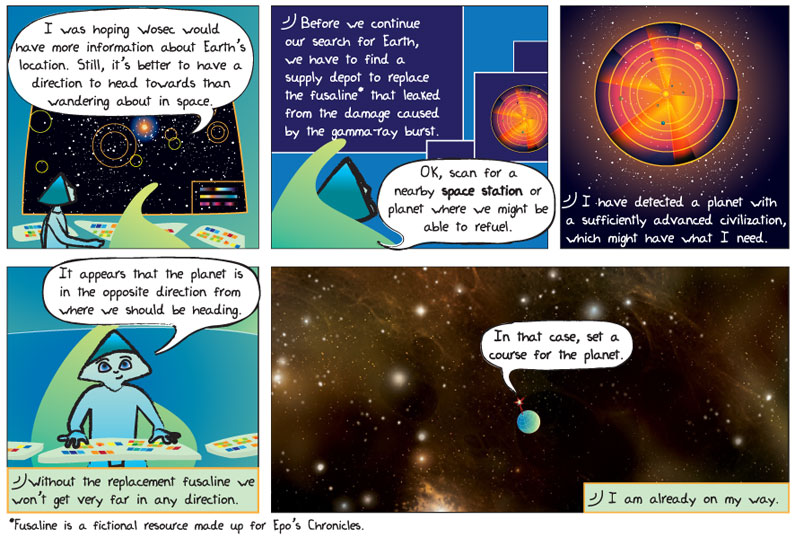 Panel 1.
[Back inside Epo.]
Alkina: I was hoping Wosec would have more information about Earth’s location. Still, it’s better to have a direction to head towards than wandering about in space.

Panel 2.
Epo: Before we continue our search for Earth, we have to find a supply depot to replace the fusaline* that leaked from the damage caused by the gamma-ray burst.
Alkina: OK, scan for a nearby space station or planet where we might be able to refuel.

Panel 3.
[Several moments later.]
Epo: I have detected a planet with a sufficiently advanced civilization that might have what I need.

Panel 4.
Alkina: It appears that the planet is in the opposite direction from where we should be heading.
Epo: Without the replacement fusaline we won’t get very far in any direction.

Panel 5.
Alkina: In that case, set a course for the planet.
Epo: I am already on my way.
*Fusaline is a fictional resource made up for Epo’s Chronicles.

Space station – an artificial satellite orbiting a star, planet, or moon that is capable of supporting one or several crew members.

International Space Station – the official website of the ISS.

Earth currently has one space station, the International Space Station (ISS), which orbits the Earth at an average altitude of approximately 350 km. It has a crew of about six astronauts at any given time. While the ISS does not act as a refueling station for space craft heading to the Moon or other parts of the solar system, some scientists have suggested that in order to be able to routinely travel to the Moon and back and perhaps even to Mars, we will need space stations with the ability to refuel the space ships of the future.