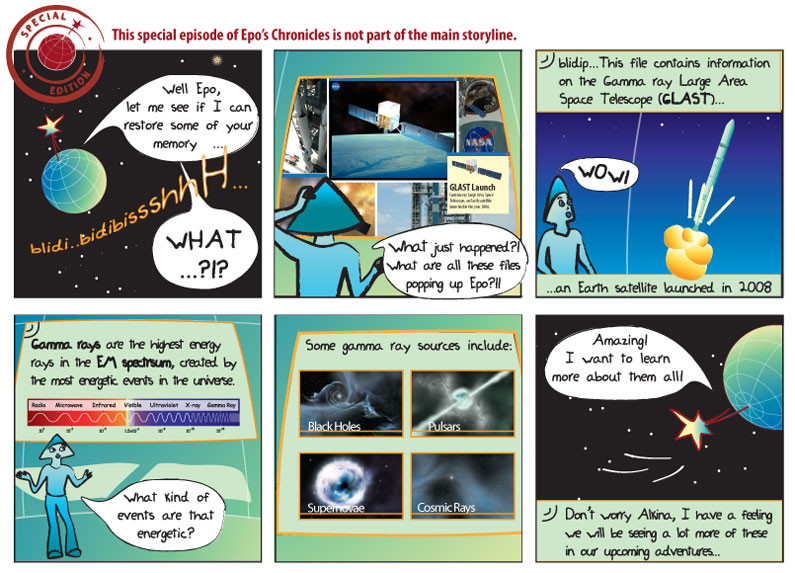 Panel 1.
Alkina: Well Epo, let me see if I can restore some of your memory…WHAT?!?

Panel 2.
Alkina: What just happened?! What are all these files popping up Epo?!!

Panel 4.
Epo: Gamma rays are the highest energy rays in the EM spectrsum, created bythe most energetic events in the Universe.
Alkina: What kind of events are that energetic?

Panel 6.
Alkina: Amazing! I want to learn more about them all!
Epo: Don’t worry Alkina, I have a feeling we will be seeing a lot more of these in our upcoming adventures…

GLAST – The Gamma-ray Large Area Space Telescope (GLAST) is an Earth-orbiting satellite launched on June 11, 2008 to explore the gamma- ray sky. Its called Gamma-Ray because it measures the highest energy light, known as gamma rays; Large Area because the telescope can see almost one-fifth of the entire sky at once; and space telescope because, well, it’s in space! After launch GLAST was renamed to Fermi Gamma-ray Space Telescope.

Electromagnetic (EM) Spectrum – This is the continuum of waves of light, which range from very low frequency and low energy radio waves to very high frequency and high energy gamma rays. The kind of light we are familiar with is visible light, which is a tiny sliver roughly in the middle of the EM spectrum.

Gamma Rays – This is the most energetic band of the electromagnetic spectrum. Fermi will measure gamma rays with energies millions to billions times the energies of visible light rays.

Fermi E/PO – Fermi Education and Public Outreach (E/PO) website has tools and resources for teachers, students and others interested in the Fermi mission and high energy astrophysics.

Cosmic Colors – A webpage along with an interactive activity designed for younger scientists (perhaps like you) that explains the different types of instruments that are used to detect different wavelengths of light. This site is also available in Spanish.

Fermi Multimedia Pages – Videos, images and animations related to Fermi including Fermicast, a series of vodcasts.